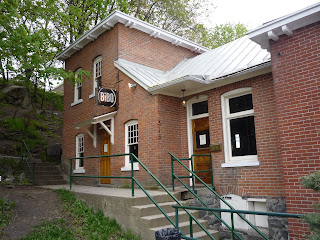 Yesterday I journeyed to Nelson with my dad for a shopping expedition. Nelson, unlike Trail, is our local fine dining mecca, and a couple of weeks ago my brother and SIL went to a new place in Nelson that they really enjoyed. My dad and I couldn't remember it's name or where Jem & Shan said it was located, except that it was at the far end of Baker Street, near Holy Smoke, the pot shop (uh, the marijuana type of pot, not the cooking type of pot). We walked up the steep public stair case next to the Holy Smoke, which is now closed, incidentally, and along an alley where Dad thought we might have some luck. Nope. We went up another set of steep stairs (Nelson is perched on the side of a steep mountain) and down another alley, and...miraculously...there was Bibo! And they were open for lunch! 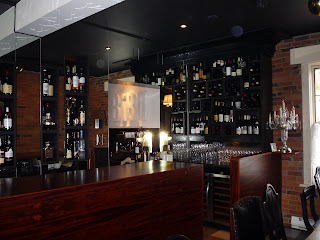 The unassuming brick exterior hides a beautifully decorated interior that combines posh seating, mirrors, and 1940s-esque decor. The bar is made of a lovely dark wood, and the shelving displaying all the booze appeared to be made out of wooden boxes painted black. It's small inside, but not claustrophobically so. It wasn't busy when we arrived at 2:00, so there was no problem getting a nice window seat in the corner. Our server was very attentive and knowledgeable, and the only thing that marred the scene was the group of four girls in the opposite corner having what was obviously a girlie lunch, which is great, except they were talking very specific boyfriend talk that wasn't nice to be overhearing in the company of one's sixty-something father. 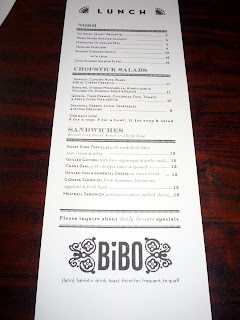 After being assured by our server that we were not under-dressed (this place seemed a bit posh for jeans and T-shirts), we looked over our menus and proceeded to have a very difficult time deciding on what to have. It wasn't a huge menu, but everything on it looked wonderful, and when the dishes were served to the girls in the other corner and looked so artistic, I really started to struggle with what to order. 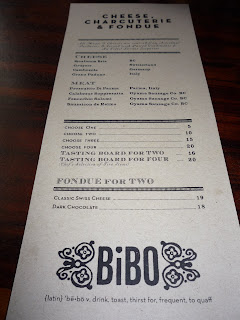 My dad is a cheese fanatic, and he was impressed that there was a cheese and charcuterie menu, including a cheese fondue option, so he had a doubly difficult time choosing something to eat. In the end I opted for the grilled chicken sandwich, served on baguette with brie, grilled asparagus, and garlic aoli, and I chose the soup of the day to go with it. The soup happened to be a jerk chicken, and I was assured it wouldn't be unpalatably spicy for me. My dad had the grilled ham and emmental cheese served on raisin bread with a spinach, candied, almond and pear salad dressed in a blue cheese dressing. 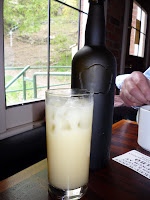 To drink, my dad had an Osso Negro coffee and I ordered a non-alcoholic beverage from the very extensive drinks menu, a mandarin orange coconut soda. It was very refreshing! The water that was brought to the table, by the way, was in an old wine bottle, and I thought that was very cool. 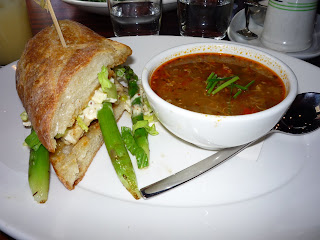 When the food came, it was amazing. Like, really amazing! My sandwich was so rich with flavour it was almost too much for my tongue to take. The asparagus was grilled perfectly, and the chef had even gone to the trouble of shaving the cut end to an attractive point rather than just snapping it off and leaving it. That was a nice little detail. The melted brie combined with the garlic aoli was so divine I can barely describe it. It was just simply astounding. 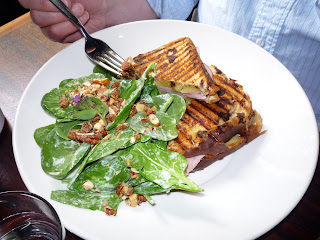 The soup was very good. I haven't had any jerk before, and this was just pleasantly spicy enough to have a bit of a kick without making me down a lot of water to cool my mouth off. It was also a bit sweet, which made for a nice contrast and a more complex flavour. My dad said his salad was excellent and loved the dressing. He also really enjoyed the sandwich and thought the use of raisin bread was a nice touch, making a sweet counterpoint to the saltiness of the ham and the creaminess of the cheese.

I really took my time savouring my sandwich because it was just so damn superb. 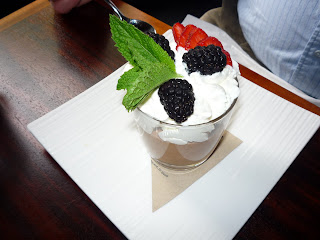 Then, we asked about dessert. I can't remember all that was on it (it was lodged in our server's brain rather than written down) but I ordered the lemon tart and Dad ordered the chocolate frangelico mousse. Both were nicely presented, mine on a cool square plate and Dad's in a glass cup topped with berries and mint. The lemon tart was bursting with lemony goodness! It was a small portion, but it was a perfect ending to a meal - and light and refreshing. Dad said his mousse was very good. 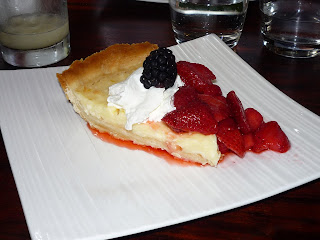 Lunch for the two of us, with beverages and taxes, came to just over $41. Our sandwiches were $12 each, and the desserts were $7 apiece. My drink was $3.

Bibo is located at 518 Hall Street in Nelson, and in June will have a patio so customers can enjoy their food and drink outdoors. They are in the process of getting a web site done, but until that time they are using this temporary site.

A place I definitely recommend if you're ever in Nelson!
Posted by Wandering Coyote at 11:29 AM

I usually swing through Nelson once a year...this is on the list for this summers trip!

Cathy: and you like wine, too, so you'll be even more impressed! I don't drink it and my dad was driving so we stuck with non-alcoholic drinks.

I was looking for your e-mail you send me and I can't find it. I have quite a bit of free time now if you wanted me to make you a banner/layout. Lemme know.

Yum! I'd have never thought to use jerk chicken in a soup. I bet that was great! The salad looked delicious, and that certainly wasn't any ole chicken sandwich!

Man, wish I lived close enough to go here! Everything sounds & looks awesome. I love that old wine bottle and the sammie...OH! Yum, yum, yum...you've made me hungry again. (and you know, sometimes the marijuana pot and the cooking pot are one in the same...tee hee...)

What a great place!!

I soooo want to go here! That jerk chicken soup sounds divine. And the sandwich? Take off the revolting asparagus and I'd be all over that!

That place looks like it is loaded with my kind of atmosphere.

Sounds like worth visiting this restaurant, if only I live close by, or who knows I'll visit this town one day. Thanks for the review dear.

That grilled asparagus sandwich looks simply mouth watering. I also really like the decor. I'm just a sucker for that dark look.