Dining at The Garage 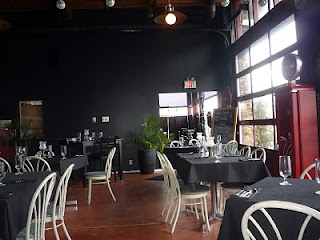 The Garage has been around Rossland for quite a while, and has had two incarnations. A few years back, it as a high-ish end steak house, and for ages all my dad could talk about was the amazing steak he had there with a blue cheese sauce. I never ate there during this era of the restaurant because A) I didn't live here for much of that era, and B) when I was here, it was way out of my price range. Some time ago (I don't remember when exactly) the restaurant closed and the building was put up for sale. It never sold, so the owner revamped the menu into something simpler and more affordable, and all I ever heard was how great it was. And it was all of a sudden in my price range! It still took me a while before I actually got to eat there, but better late than never!

Located on Columbia Avenue in the former Shell gas station, The Garage reopened in November 2009, touting itself as a family restaurant with a an emphasis on burgers, ribs, and owner Julie Eyres' desserts. There is a great article here about the "new" Garage with an interview with Julie herself. 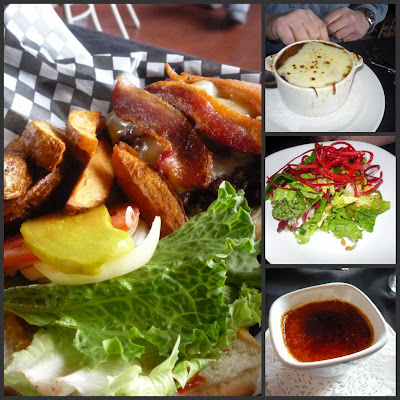 Now a more casual eatery with a garage theme, I have had two opportunities to eat there recently, and I can say that both experiences were great.

The first time, I went with my dad and SIL, and we all had bacon mushroom cheeseburgers with Julie's thick cut fries. Dad started off with a bowl of French Onion soup, which he said was good. Shan and I opted to have half salad/half fries with our meals; she had the green salad and I had a Caesar (this cost $2.50 extra, if memory serves).

We were told at the beginning of our service that chocolate souffle was on the menu for dessert, and if we were interested, it needed about 25 minutes or so to bake and we'd have to order it when we ordered our meals, and that's what Dad opted for.

The only glitch with this meal was that the burgers came already dressed with ketchup, mustard, and relish. I wasn't aware of this when I ordered, and I hate mustard and relish! I sent my burger back & I got a new bun without the offending condiments, and all was well after that. The burgers were served in a hub cap lined with that checkered paper you often see in diners, and the meal was excellent. 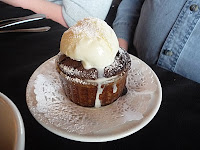 My dad had the souffle and loved it. I didn't have dessert because the burger & fries were so huge I was stuffed. Shan, always a huge fan of Julie's vanilla bean creme brulee, had that for dessert. I had a taste and it was awesome!

The second meal was a few weeks later. I needed a greasy meal very badly and ordered the halibut & chips. Shan had a chicken burger with bacon & mushrooms. Oh, man! The halibut & chips was AMAZING. The fish was perfectly cooked and was so tender and juicy...It was heavenly. Shan enjoyed her burger. Both needing sugar fixes on top of our fried food cravings, Shan had the homemade hazelnut ice cream with espresso & biscotti, and I had a chocolate sundae. This meal totally hit the spot! 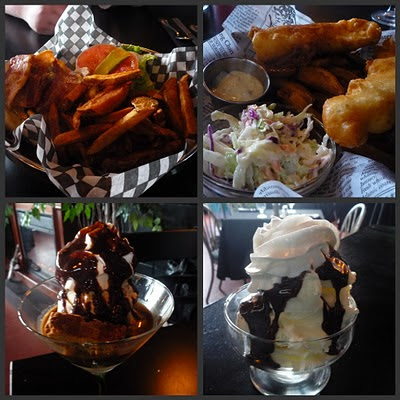 On top of this, for both meals I indulged in a cocktail: the Rattlesnake Long Island Iced Tea. This is a regular Long Island Iced Tea laced with melon liqueur. Big, potent drink, let me tell you, and for someone who drinks as rarely as I do, it hit me quickly and I was feeling pretty good.

Definite yumminess to be found at The Garage! With my boozy drink, my first meal came to about $18, and with tax & tip, my second meal came to $32 (I had two pieces of halibut for $16.95), and although that is a lot for one person, it was worth it.
Posted by Wandering Coyote at 7:42 PM

It all looks and sounds good but that dessert...I want one!

I have missed your restaurant reviews - thanks for this one - sounds marvelous - and now I am hungry!!