This month's issue of Food Network Magazine had in it a very mouthwatering article about Bobby Flay's new book. In fact, I made the avacado relish recipe from it and was very impressed. Luckily, I was able to score a review copy and it arrived last week. Over the past couple of days, I've made a few more things from the cookbook that have converted me over to Bobby Flay fandom.

The flap reads: "After a long day spent in one of his restaurants or taping a television show, what Bobby Flay craves more than anything else is … a crusty-on-the-outside, juicy-on-the-inside burger; a fistful of golden, crisp, salty fries; and a thick, icy milkshake. Given the grilling guru’s affinity for bold flavors and signature twists on American favorites, it’s no surprise that he has crafted the tastiest recipes ever for this ultimate food trio."

Bobby Flay's Burgers, Fries & Shakes is a really fun book to have around. I totally enjoyed the photos and the write-ups, and the recipes were simple enough on their own, but what I particularly liked was that it inspired me in so many ways. I've had a lot of burgers in my life, and some of them have been pretty great. But this book really opened my eyes about all the different things one can do with a burger.

I made three recipes - two burgers and the Buttermilk Onion Rings on page 101. Bobby doesn't believe in adding fillers to burger meat, like eggs and breadcrumbs, because then you're essentially making meat loaf. I grew up on burgers made this way, as my mom was always trying to stretch the meat more to feed the family. What Bobby instructs is to just make a patty and season it with salt & pepper on both sides. Ah, the freedom! Simple is best, truly! I used lean ground beef that was locally procured, and it was tasty enough on its own. 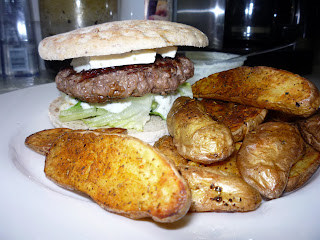 The first burger I made was the Greek Burger on page 46. Yes, I cheated and bought tzatziki from the local overpriced grocery store. I skipped the olives. I don't like tomatoes. But the feta and tzatziki was enough on its own to create a wonderful burger. I had intended to make the onion rings to go with it, but I found that all my onions had gone rotten! I was ticked! So I served this burger with fingerling fries.

The second burger I made was the Miami Burger on page 51. I even splurged on Swiss Cheese, which is ludicrously expensive here and not something I buy very often. This was the best burger ever! I mean, anything with ham & swiss on it is going to be amazing, but I really loved this burger. In fact, I'm going to have it for dinner again tonight since I have one patty left over. 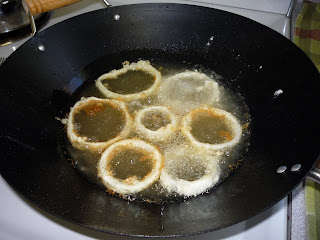 Yesterday, I got some not rotten sweet onions and made the Buttermilk Onion rings to go with the Miami Burger. The instructions say to remove the papery membrane between the layers of onion, but that got really annoying really fast and I was overcome with onion-induced tears very quickly after beginning. So, I gave that up soon enough and I found that the onion rings didn't suffer for that at all. These were awesome! They were easy to make and very, very tasty. I use my wok to deep fry and it works well, though I had to fry in several batches. It didn't matter. The onion rings were fab, and I'll definitely be making them again.

Here is the final result: 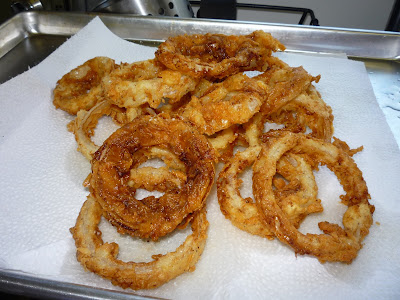 So, this was last night's meal: 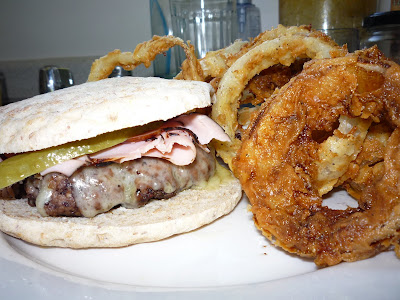 I didn't get around to making any milkshakes, but that's definitely on my to-do list, since some of his shakes are just too decadent NOT to make!

All in all, a great little book! Definitely a keeper and a recommend!
Posted by Wandering Coyote at 9:27 AM

love love love the hamburger buns - they are the only ones I'll buy anymore! And this does it...I'm buying the book.

I am the same way about my burgers. I like minimal seasoning but try to spice them up with fancy toppings. Both burgers look great, and those crispy onion rings, mmm. I'm tempted to whip some up right now.

Very yummy, I keep seeing this book reviewed and wish I could get in on that action (who does a girl need to know!!??). But anyway, you did it justice and thanks for the review :)

Cathy: pretty sure you won't be disappointed!

Reeni: The rings are sooo easy. Let me know if you make them, OK?

Girlichef: well, my gig is through Random House of Canada...I'm not sure how Americans would get in on the action.

Love those onion rings!! And the ham and swiss burger sounds perfect. This is the 2nd review Ive read on this book that says its a good one to buy!

From the library I checked his book Mesa Grill and that wasn't one I liked too much. This cookbook sounds pretty good. He really is a good looking man, isn't he?!

I do love a hamburger...definately take a peek at this on from the library. It's a way I can try before I buy!

I saw this book the other day, you may have just convinced me to buy it...

I'm drooling over it all especially your awesome onion rings! Dang, I might have to get this book. My hubby and I are big time burger freaks. Sounds right up our alley.

I wasn't so concerned with stretching the meat but I found thawed hamburger didn't always stick together well enough for burgers so I added eggs and bread crumbs. Your dad started adding all sorts of seasonings. Come to think of it I haven't had a hamburger since I've been back in Canada and I certainly didn't have one while in England. Maybe it's time!

I am hungry for Bobby's food all over again. It all looks so delicious and I have not had my lunch yet.
You had much more success with the onion rings than I did, they look great.
I agree, this is a great book, such fun for summer.

Fantastic ! Bobby Flay's Burger's and Fries totally rock WC ! Your take on it would do him proud : ) ...thanks for this !...