Here is my most recent article appearing in Bread 'n Molasses Magazine. 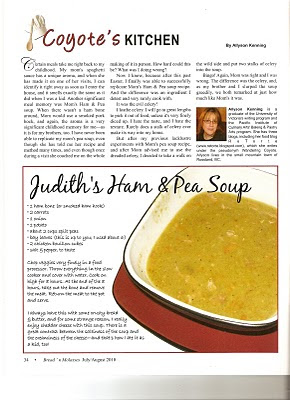 Funny thing is, I forgot to put celery in the recipe when I sent it to the editor! Oops! Yeah, just add a couple stalks of celery to the pot and you'll be good!
Posted by Wandering Coyote at 9:45 PM 5 comments:

The contractors are still here building our new deck/porch thingy, and the other day I had the time to do some baking for them, which is something they always appreciate. After my review of In the Sweet Kitchen, I was really inspired to make these cookies from page 503 of that book, and I still had some dried cherries leftover from Jodi's amazing parcel. I am now down to a precious few dried cherries, so I am totally hoarding them until I can find another source! I would use cranberries if you can't get hold of the cherries. 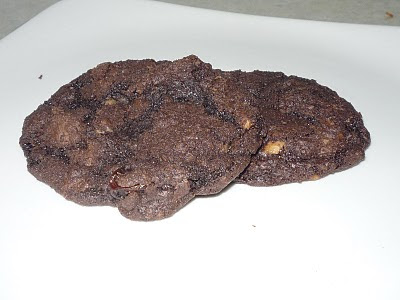 Chocolate Fudge Cookies with Toffee & Dried Cherries, from In the Sweet Kitchen by Regan Daley

3. Bake for 15 or so minutes, but underbake for sure to get a fudgier cookie.

There were totally excellent! I loved them! I kept a few for myself and gave the rest away, and the contractors were really grateful. I can't believe I put off making this recipe for so long.

I forgot to take a picture of the full batch of the recipe, so I only got a shot of the last two I had on hand when I finally remembered to take a photo.
Posted by Wandering Coyote at 3:41 PM 5 comments: 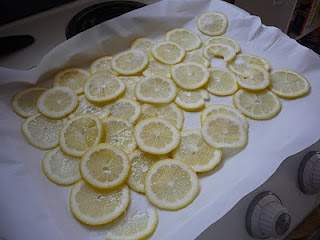 I rarely go to the liquor store, but other people I know go regularly, and one of those someones brought back a recent copy of Taste Magazine, which is put out by the BC Liquor Stores. This is the first time I've made a recipe from the magazine, and the occasion was Father's Day. Lemons, as it happened, were on sale at the time! The original recipe involved a lavender syrup, but as I didn't have any access to lavender, I skipped it altogether. 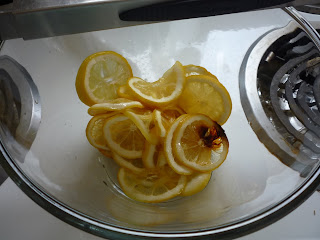 1. Preheat oven to 375C. Grease sides of a 9" round cake pan and line the bottom with parchment.

2. Slice lemons thinly & remove seeds. Place them in a layer on a baking sheet lined with parchment paper & sprinkle with the 6tbsp of sugar. Roast for about 15 minutes or until lightly caramelized on the edges. Let cool.

3. Arrange 3/4 of the lemon slices on the bottom of the cake pan. Chop the remaining lemons & set aside. Sift flour & baking powder into a bowl & stir in almonds. In a separate bowl, beat butter & sugar together until light & fluffy. Beat in eggs, one at a time, until well mixed. Fold in flour mixture, and add chopped lemons & accumulated juices. Spread batter over roasted lemons. Bake for about 40 minutes, or until done in the centre. Allow to cool for about 15 minutes at least before turning out of the pan. Serve with whipped cream. 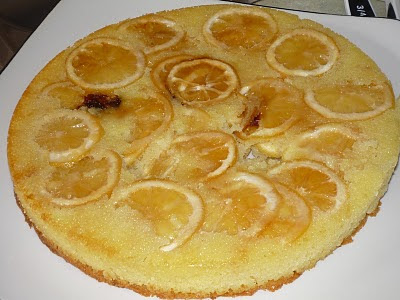 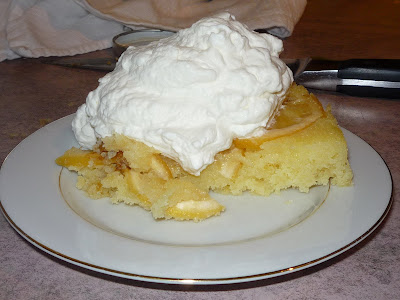 This was a hit with my family. The cake was so moist it was pretty much pudding-like. The lemony flavour was over the top. Unfortunately, the cake was so moist that it was hard to serve nicely because it kept breaking up. Also, the lemons I got were particularly thick-skinned, which was kind of annoying: more skin than fruit really, and it got pretty chewy at times. Still, a really worthwhile and adaptable recipe that I can see going well with other citrus fruits like oranges or even grapefruit. 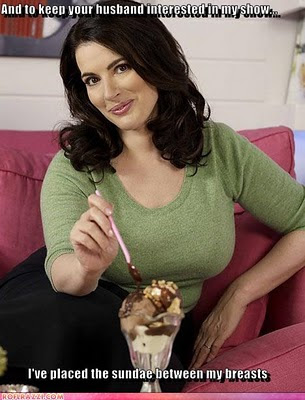 Posted by Wandering Coyote at 8:25 AM 2 comments: