When my brother & SIL were moving out of the place next door, I found a copy of Kootenay Woman Magazine, a freebie that comes in our mailboxes every so often. This recipe was on the back cover, and it caught my eye as I was putting it in the recycling bin. I made it the other day, making one significant substitution: I put espresso powder in place of the cinnamon. WIN! It was awesome. I kept about a dozen cookies for myself and took the rest into work, where they were much appreciated. 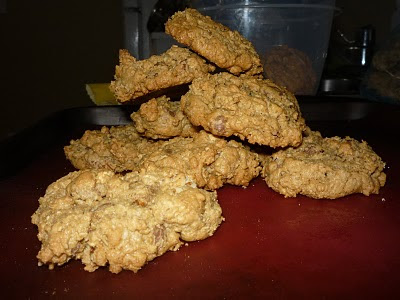 So, the day after the wedding there was a huge family gathering at Shan's parents' place. There were 78 people there altogether. Once again, the food was copious and fantabulicious. There were left over spot prawns, but there was also sockeye salmon, and IMO, the star of dinner, fresh oysters! All this seafood bounty was, again, courtesy of Shan's uncle who is a fisherman on Vancouver Island.

For a run-down of some non-food related incidents around the wedding, you can go here.

But let's get started!

Shan's mom, C, who is also a caterer, BBQed a bunch of roasts, and one of the aunties brought a huge crock pot full of homemade baked beans. 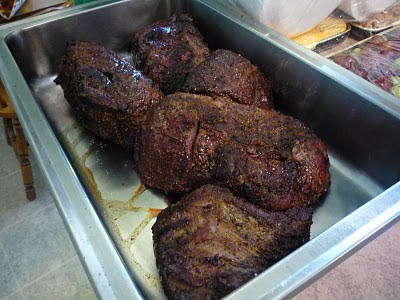 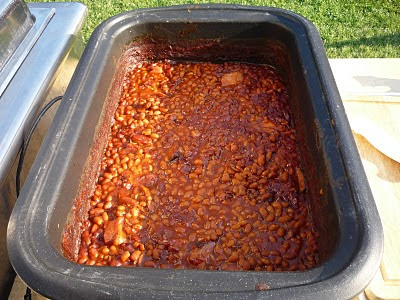 Here is the salmon. It has a brown sugar & soy glaze on it. 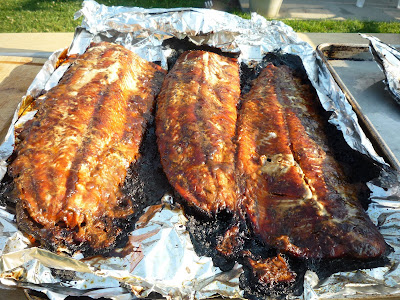 Also on offer were some of the leftover appies from the wedding dinner the night before. This was so awesome because the appies were excellent - and, bonus, there were still leftovers after this Sunday meal, so I got to take a whole bunch home & snack on them during the week! The big pretzel you see came from a bakery in Cranbrook and it was part of the midnight snack served during the dancing at the reception (which I wasn't there for; I left at 10pm). 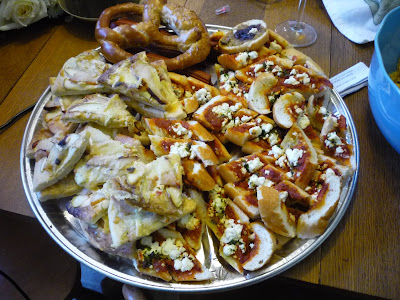 There were tons of salads: 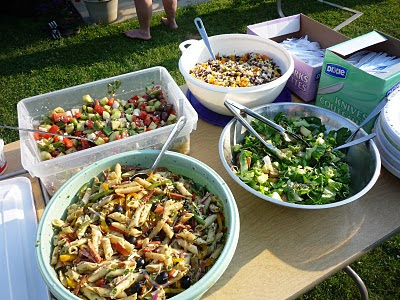 Here are the spot prawns: 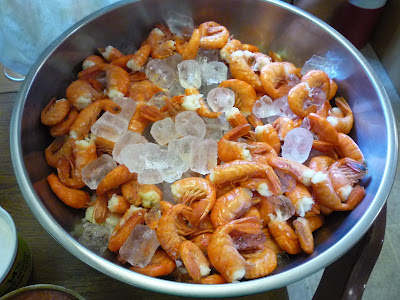 And here was the star of the show! The oysters! One of Shan's cousins grilled them, seasoning them with butter, lemon juice, and a tad bit of tobasco sauce. They were huge! I cannot tell you how orgasmically fan-fracking-tastic these were. They were so fresh, so delicious...they were surreal! I was in heaven! 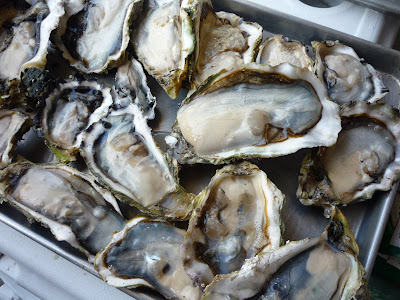 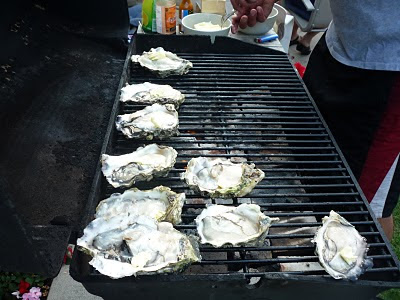 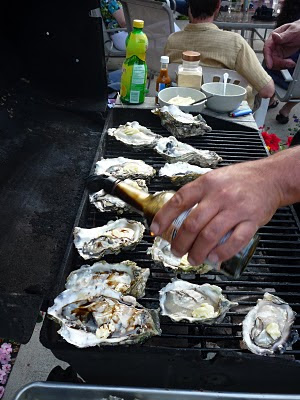 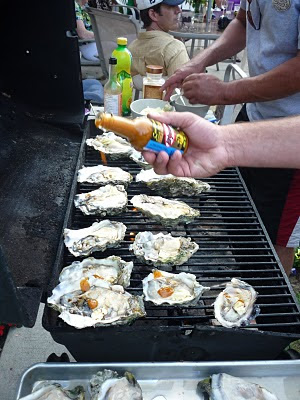 Here is one of my plates...I had seconds...Can you blame me? 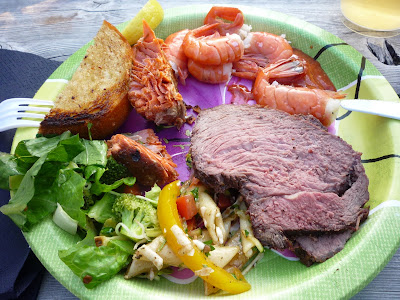 And, there was dessert. Another auntie brought a chocolate fountain with all kinds of goodies. It was a huge hit, and it was super amazing! 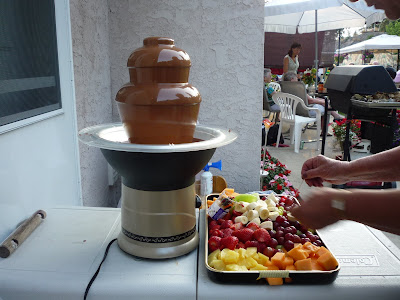 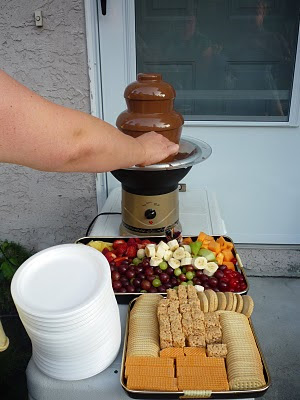 So, that about sums up the wedding eating. I'm pretty sure I gained back all the weight I've lost since January, but I totally think it was worth it!
Posted by Wandering Coyote at 12:46 PM 2 comments:

As promised, some pictures & rundowns of food I experienced & ate during my brother's wedding celebrations at the tail end of July (better late than never, right?). It was a food fest and half, let me tell you! My SIL's family always celebrates events big & small with copious amounts of food - and awesome food at that! So, here we go.

We'll start off with the rehearsal dinner. It was supposed to be pulled pork, but a tragic freezer breakdown just before the wedding put the kybosh on that because the pork butts were ruined! Instead, we had a huge spaghetti dinner! 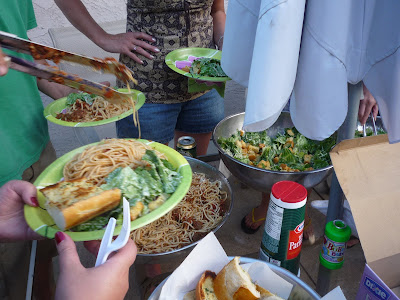 But the highlight of the evening for me as a foodie was the peeling & steaming of the Vancouver Island spot prawns fished by Shan's uncle, frozen, and brought to the wedding celebration as a gift (more seafood gifts would be on the way, but that is another post!). The spot prawns were so delicious I can't even tell you. I am used to bland frozen shrimp from the grocery store, and so these spot prawns tasted like candy to me! I participated in some of the peeling, but as I had just had my nails done, I bailed early because I didn't want to ruin my lovely manicure. But here are some photos! 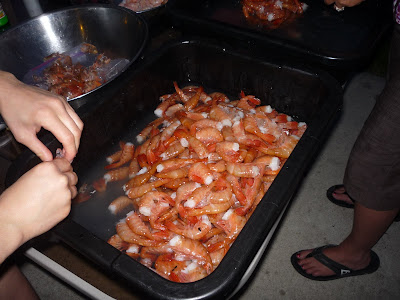 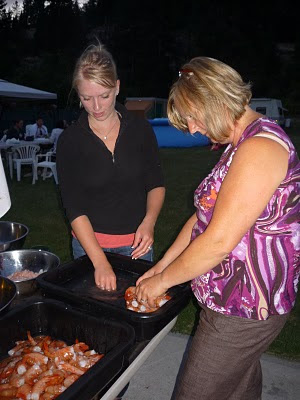 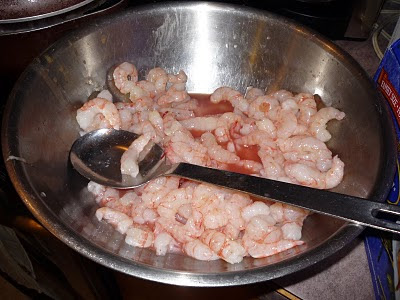 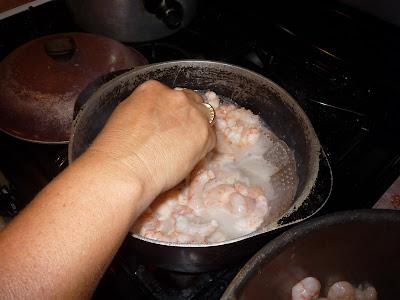 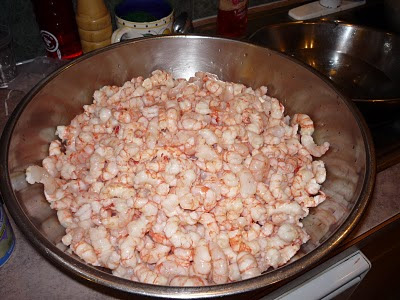 The prawns were served at the wedding reception with a homemade cocktail sauce, and they were amazing! We also had them at the family reunion on the day after the wedding.

As for the wedding feast itself, it was fantabulous. I don't have a lot of pictures because it was a buffet setting, which is hard to photograph if you're in a line-up, and I was busy drinking & socializing. The catering was done by a Nelson outfit called Alligator Pie Catering, and Shan made an excellent choice because the food was superb. In fact, everyone was so impressed with it that Shan's sister, who is getting married next summer, is, I believe, planning on using Alligator Pie, too.

Crostini with Green Olive Tapenade, Goats Cheese and Caramelized Onions
Roasted Tomato and Red Pepper Bruschetta with Goat Cheese and Basil Drizzle
Pita triangles baked with brie, roast chicken, and green apple (not on their online menu, for some reason, but my absolute fave of the three!)

Here is my plate: 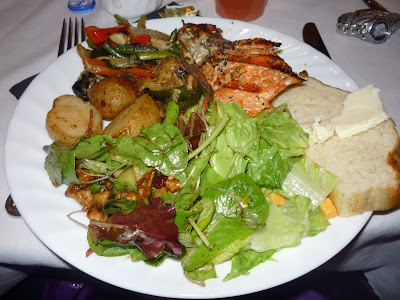 Dessert was wedding cake, made by Shan's mom, C. It was vanilla cake with chocolate ganache in the middle, and it was delish! They kept the design of the cake simple and used a fresh flower topper in keeping with the wedding colours. 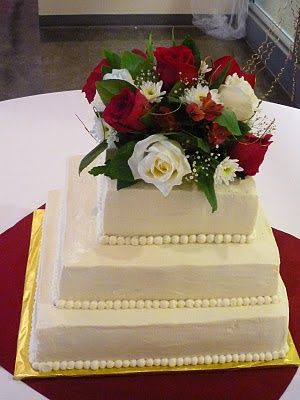 Part two will follow...sometime!
Posted by Wandering Coyote at 9:59 AM 4 comments:

This recipe comes from the latest issue of Canadian Living Magazine. I made it the other day because I was in a serious PMS state and I needed cake NOW! I had the ingredients on hand, except the 3oz of dark chocolate, but I saw that there was a handy variation at the bottom of the recipe using chocolate chunks instead of chocolate, and since I had some chocolate chips on hand, I used those in addition to a small amount of Skor bits I had hanging around my freezer! This cake totally hit the spot! 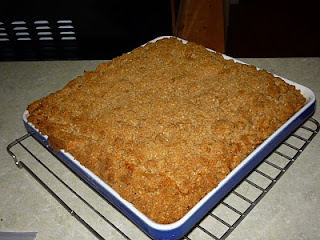 1. For the topping, in a bowl stir together sugars, cinnamon, salt; stir in butter. Stir in four and ground almonds, using hands to press the mixture together.

2. For the cake, in a large bowl beat butter & sugar until combined. Beat in egg & egg yolk. In a separate bowl, whisk together the dry ingredients. Stir into butter mixture alternately with sour cream, making 3 additions of flour mixture and 2 of sour cream. Stir in chocolate (or chips/chunks). 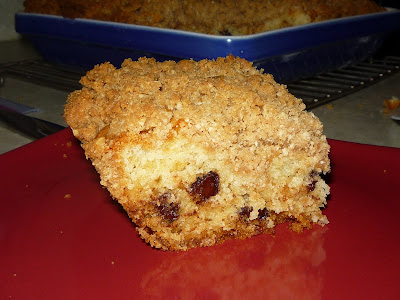 This was delicious, but two caveats I found for you: one is that I needed a 9" pan for this as 8" was not going to be big enough. Second, there was a lot of crumble topping - almost too much. But it was crunchy & tasty & I'd definitely make this recipe again!
Posted by Wandering Coyote at 1:07 PM 8 comments:

I just wanted to give a shout-out to my friend Azahar, who has a great food blog, Azahar's Kitchen. Recently, she posted a great recipe for marinated potatoes that I made for some company I had over for the wedding craziness. This recipe rocked and it was a huge hit! I couldn't find the sherry vinegar, so I substituted it with apple cider vinegar and it worked out very well. I also used red-skinned nugget potatoes - my favourite! I am still on the hunt for some oak-aged sherry vinegar and I have one more place to check (that would be LOGS, so keep your fingers crossed that if they do actually have it it won't cost me $3289+++).

This dish was a really refreshing change from your typical potato salad, so I will for sure keep this recipe around! 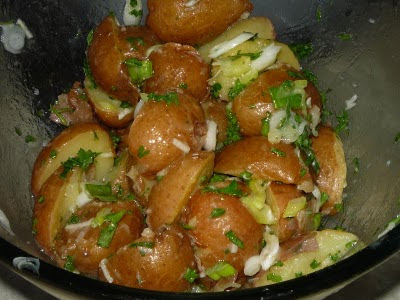 This recipe comes from the July 2010 issue of Bon Appetit, my subscription for which has just run out. As mentioned previously, I will not be renewing. Anyway, the recipe came from the RSVP section, where readers request recipes they've tasted at various restaurants around and about, and in this case, the reader who requested the recipe tried the original dish at Tejas Texas Grill & Saloon in Hermantown, Minnesota. It caught my eye because I love cilantro and an entire pesto made from this ingredient was just too good to pass up! I was not disappointed! This was a fantastic dish. I even invested in a mini of tequila! 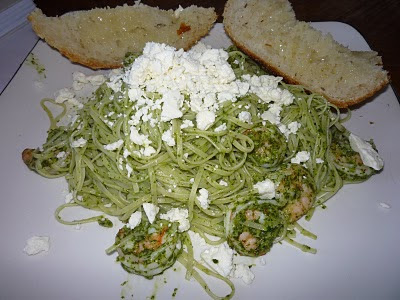 1. Blend 1 1/4 cups cilantro & next 4 ingredients in a food processor until a course puree forms. Gradually add oil as machine runs. Season with salt. (NB: I did not use the full amount of oil.)

3. Meanwhile, heat 1 tbsp oil in a large skillet over medium-high heat. Add shrimp & cook until almost opaque in the centre, about 3 minutes. Remove the skillet from heat; add tequila. Return skillet to heat and stir until sauce is syrupy, about 30 seconds. Add pesto; stir to coat. Remove from heat.

Awesome, tasty, and easy. I'll definitely be making this again, next time with a margarita, perhaps!

Sorry for the long absence...Life got extremely busy in July with my brother's wedding and the ton of company & hectic social schedule that involved, plus I took on some extra work and am now also doing a regular reporting gig for the local online paper, The Rossland Telegraph. Foodblogging has definitely sunk down several notches on my list of priorities.

Anyway, there are posts coming up because the food over the wedding events was beyond ridiculous and beyond amazing, so I'll be filling you in on that. I will say that I am now planning on going on a watermelon diet because I have eaten so much in the last 2 weeks I'm pretty sure all the weight I lost since January is back. Sigh...

So, for now, here are some things for you to giggle at until I get my act together.

But before we get to the giggles, I just want to give a brief shout out to Mary-Lou & Rod, who are my most excellent friend, S's, parents in law, and when S and her husband M came to visit me this week (which was awesome as I don't get to see them very much!), they were telling me what huge fans of ReTorte Mary-Lou and Rod are, and that Mary-Lou very faithfully makes a lot of the recipes I post here. So, THANK YOU Mary-Lou and Rod! Hearing that feedback made me so happy! I'm glad you are enjoying the site so much, and hopefully this will motivate me to post more frequently.

Also, when my mom was visiting this last week, she was telling me how much my aunt Lyn loves the site and uses the recipes, especially the cookie recipes, and so I want to thank Lyn for her support and her frequent visits! Again, hearing this made me very happy, and again, now that I have heard this feedback, hopefully it will spur me on to more frequent posting! Thank you, Aunt Lyn! 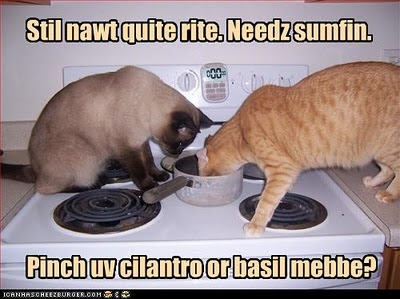 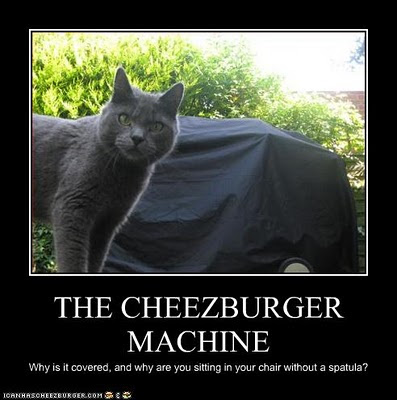 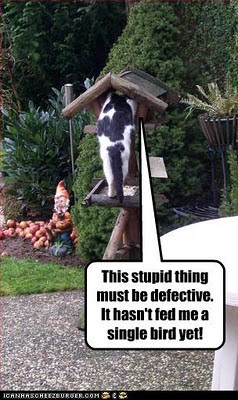 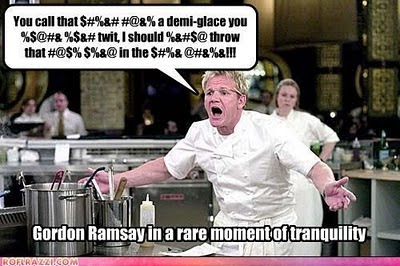 Posted by Wandering Coyote at 8:27 AM 3 comments: