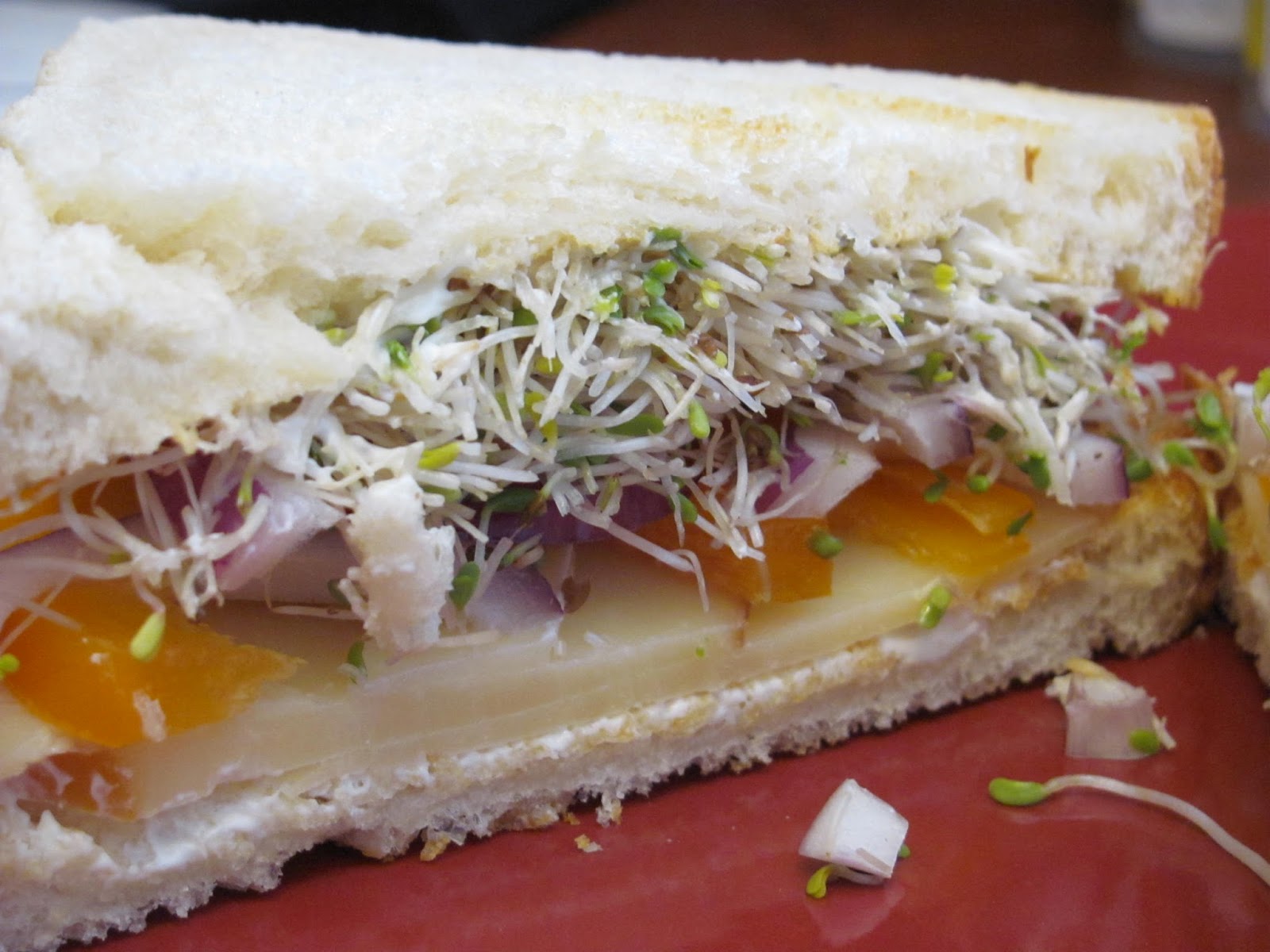 This is my new go-to sandwich: cream cheese, some hard cheese, peppers, red onion, and alfalfa sprouts. Sometimes I add avocado.  I came out of the hospital with a hankering for, of all things, the sprouts.  I have been eating this sandwich fairly faithfully since I got out of hospital.

It's fairly low in sodium (the only value I don't know in this case is the bread, which is a sourdough from Cobs), but I used cream cheese (Island Farms brand, as it was the lowest in sodium) with 50mg/tbsp and I used a smoked cheddar purchased from Costco that, for a serving of 30g, has 8% of my sodium intake for the day in it.  I am pretty much done with deli meat. There are some lower sodium brands of deli meats, but I have decided to stay away from the stuff as much as possible because I know they're full of chemicals etc.

But oh, a pastrami sandwich with a huge dill pickle would go down really, really really well right now...
Posted by Wandering Coyote at 1:39 PM 1 comment:

So, where have I been and what have I been up to?  Well that's a long story.  The short story is that in Feb. I had a major health issue rear up before me - I was diagnosed with cardiomyopathy and heart failure.  As a result, I have to be on a low sodium diet and also I must restrict my fluids to 1.5-2L of fluid per day.  Easier said than done!

I have to convalesce from this for a while - I was in hospital for a month. I am bored, and I need a hobby.  Why take up something new when something I've had previously fill my recovery time with is right here, waiting to be revived?  Yep, I'm going to attempt to get back into food blogging.  Plus I have a new added dimension: low sodium cooking.

So far, I haven't enjoyed low sodium eating.  No salt = no flavour, right?  Well, pretty much!  I have recently become more obsessed with food labeling than usual, and I've had to make some pretty significant adjustments.  No salt also = no chips.  Ugh!  I have not had a potato chip in nearly two whole months!

Yesterday I ate out and had a case of the food fuck-its.  I gained 2lbs.  Today, I went to the grocery store and got some low sodium pantry items, feeling a little bit defeated.  I thought I could do low sodium my way, without any big substitutions.  But I was wrong.  My daily intake of salt should be no more than 2mg, which is about a teaspoon.  Dear God, how am I going to live with this?

Tonight I made a low sodium meal with some of my new ingredients: roast beef and roast potatoes.  I don't know exactly how much sodium was in this meal, but the only ingredients that contained sodium were the packet of low sodium beef boullion (25% less salt than the regular stuff) which I cooked the roast in, and the 1/2 teaspoon of Club House's Garlic Plus seasoning mix I put on the potatoes (55mg/serving).  I seasoned the beef with Costco's brand of salt free seasoning, which wasn't bad at all. I sprinkled the dinner with Windsor's Salt Free "salt."

What a waste of $3.49!  The Salt Free = flavour free!  I also had the saltless salt on popcorn earlier today and though I thought I gave the stuff a decent shake over the popcorn, I didn't taste any saltiness.

The dinner as a whole, though, was quite palatable.  I have enough for leftovers and a few sandwiches.

Man, this is going to be a long road.
Where are the veggies you ask?  Hmph!  I bought a salad kit the other day but it's gone off already.  Whatever!