I've bookmarked a lot of recipes from the April 2012 issue of Canadian Living, and this is one of them. This is my first foray into Korean food, which is not a good thing living where I do. I should be way more adventurous and go off to a Korean restaurant and really try the food. I've been hesitant, though, because I once asked a friend who'd eaten Korean what it was like and she said one word, "fiery." OK, that put me off because "fiery" to me is not a good thing. I like a bit of kick, but certainly nothing anywhere approaching "fiery."

This recipe appealed to me because the ingredients were simple and there was no fieriness in it to be found. One thing I substituted out was the mirin for saké. I don't have mirin on hand but I always have saké around because lots of Kylie Kwong's recipes call for it. 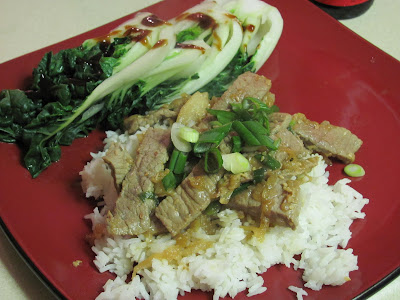 The original recipe is HERE.

I have to say, this was a bit on the flavourless side. I let it marinate for an hour, but it seemed like little of the marinade stuck to the beef to flavour it. In theory, this should have been tasty. Was it the saké substitute? Would the mirin have packed more punch? I don't know. But, next time I might try saving the marinade and thickening it with cornstarch to retain some flavour.

I accompanied the dish with Kylie's Bok Choy with Oyster Sauce.
Posted by Wandering Coyote at 6:37 PM

I like fiery so I would have slipped in some sriracha anyway, even if the recipe didn't call for it.

To me mirin is sweet and has more "body" to it than sake, so you could be right.

Yes, I'm going to have to make a concerted effort to find some Mirin. I have a feeling this recipe would have had more punch with it.