Tonight my roommate made dinner and she decided to try out a new recipe from our favourite place to get recipes & food ideas these days, Pinterest. It was a bit of a risk since her seven year old daughter had never had quinoa before and claimed the meal smelled "gross" while it was cooking. 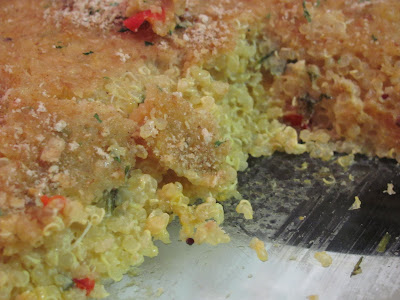 The recipe is HERE.

Well, the seven year old wasn't exactly sold on the quinoa version of this favourite, though she ate most of what was negotiated in order for her to get dessert (I made ice cream sandwiches, but that's a future post). My roommate and I, however, thought this dish was a complete hit. We accompanied it with some asparagus and garnished the "mac & cheese" with salsa and sour cream.

This recipe is very versatile. T used red peppers and green onions, but the veggie options and accompaniments are limitless. I'm imagining a version with ricotta cheese and bacon, for instance, perhaps some spinach.

I have always liked quinoa and am glad I've found another tasty way to cook with it. Thanks T!
Posted by Wandering Coyote at 11:20 PM

mmmm I think I'd love this one, Allyson!

I suspect you would, Dezzy! It's right up your alley!