Today I ventured into as yet uncharted territory: the making of doughnuts.

As I mentioned in this post, I went to Top Pot in Seattle this month and picked a copy of their cookbook. When my roommate, T, went through the book, she spied a recipe that tickled her fancy right away: the Pumpkin Old-Fashioned Doughnuts. T, like me, loves pumpkiny baking, and since I had some of the stuff stashed in the freezer after making the pull-apart loaf, I was in.

Here is the recipe, which I lazily cut and pasted from this site (thank you, Nicky). 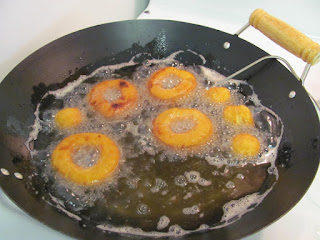 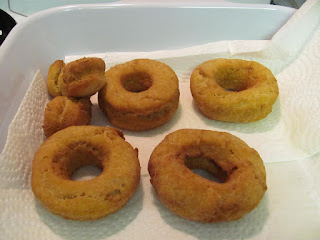 For the Pumpkin Glaze 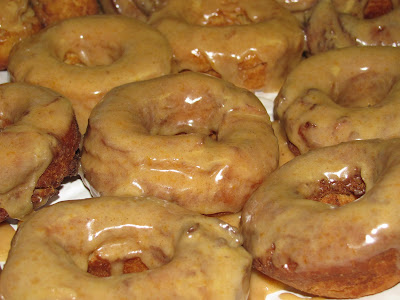 Needless to say, these came out just amazingly. I especially loved all the little "Timbits"! Of course, now we have a bunch of doughnuts kicking around the house, but I've had worse problems.

One issue I had was that there was too much glaze for the number of doughnuts I had, so I have put the remaining glaze aside for another use. I'm not sure what that use would be at this point, but it's there should inspiration strike. 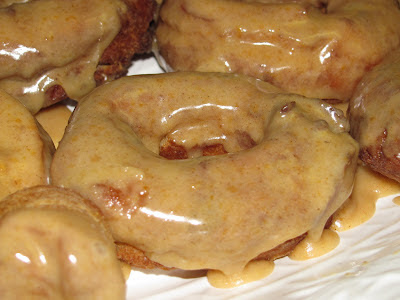 As you can see from the photo, I deep fried in my wok. This is my preferred deep frying vessel and it always works great.

This was definitely a worthwhile experience and I'm sure I'll be making more recipes from the book, but next time a yeast doughnut, perhaps. I have my eyes on the Raspberry Bullseyes!
Posted by Wandering Coyote at 8:37 PM