During a trip to Seattle in 2001, or thereabouts (way back in the mists of time, anyway), I stumbled upon a great little joint across from Pike Place Market that served really good seafood. The place stuck in my mind not only because of the food - it was great - but because it had bright blue and white decor and small little wooden booths that were kind of cute.

This past Christmas and New Years, I was in Seattle again for the first time in 10 years, and I took a day to go exploring around the market. I still remembered the place I'd eaten at way back when, and I wanted to go there again if it was still around. I remembered that it did not front out onto the street and that it had "oyster bar" in the title. After meandering around a while, and noting the ridiculously long line in front of the original Starbucks for future reference, I saw a sign under an awning that said "Emmett Watson's Oyster Bar." I followed the arrow up a corridor and into a courtyard, and there it was - complete with the same booths and everything! 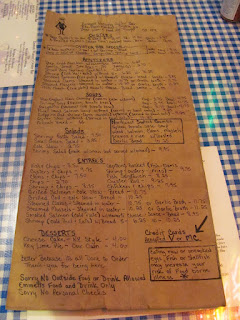 I went in, got a table, and was presented with a menu printed on the back of a paper bag.

At this point, I even remembered what I'd ordered back in 2001 (or whenever it was): the Captain's Basket. I remembered this because of the deep fried clams it had, and that the variety of fish in the basket - oysters, clams, shrimp, scallops, and some kind of white fish - was very appealing since I love all those things. And so this is what I ordered again.

And it was fantastic. Deep fried perfection! It was just how I remembered it. Served with tartar sauce and seafood cocktail sauce, the portion size was generous and the fries were perfect - hand cut, blanched first, and then fried (you can always tell). 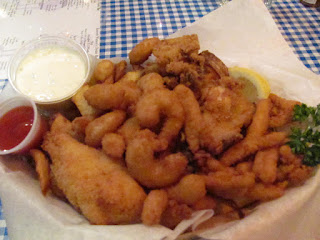 During last week's trip, I just had to go back. I went to the market on Sunday, and was disappointed to see that some places closed early. But not Emmett Watson's. They were open till 6:00 and I was in luck. 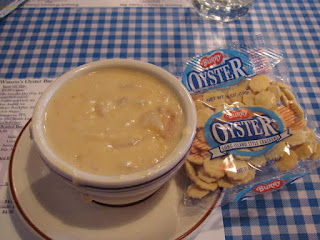 I was seated in a nice blue booth and perused the menu once again, thinking I should try something else for a change, and I figure that since this was an oyster bar and I adore oysters, I should just go for the oyster basket. It was the same price as Captain's Basket - $9.75 (a bargain, if you ask me). I also decided, since it wasn't the nicest day weather-wise to try some chowder. I am a chowder fanatic, and I was not disappointed. Stick to your ribs thick (my spoon practically could stand up in it), it was piping hot and served with a little package of oyster crackers. It was a bit on the salty side, but excellent, and I think, from the texture, it might have been thickened with mashed potatoes rather than a roux. And it wasn't filled with large chunks of carrots and celery, which I appreciated.

As for the oyster basket: excellent, again! I counted 9 juicy oysters, seemingly battered in a cornmeal batter, perfectly fried, succulent, and just fabulous. 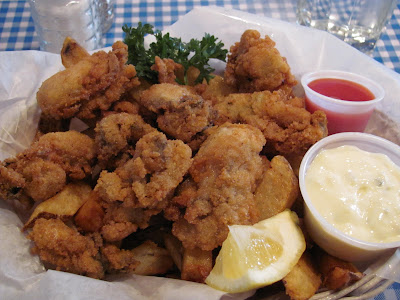 Definitely check this place out if you're in Seattle and need a great place to eat while out marketing at Pike Place.
Posted by Wandering Coyote at 4:41 AM