Last summer I was really into making my own bagels, and my product was getting better and better each time I made them. I was really learning from my mistakes. I stopped when I went back east on holidays and then moved to the coast at the end of September. Lately, I have been fancying a good bagel and I don't want to buy crappy grocery store ones because they really are a waste of money. So, last night I got down to it and started a batch.

I usually use Rose Levy Beranbaum's bagel recipe from her Bread Bible cookbook. So far, it's the best recipe I've come across, and I previously posted it here.

One of the main things I need practice on is shaping these darned things. I make a ball using the "fassionage" method I learned in culinary school, then poke a hole in the middle and start rolling and stretching the hole wider. But I always get a lopsided-looking bagel. A big lesson I learned was putting the shaped bagels on a well-floured tea towel to rise, turning them over once so both sides are floured, then putting a second tea towel over the top for the rising. I learned this after not being able to pick up the bagels to boil them without deflating them because they were sticking to whatever I was using before. With this tea towel method I have no more deflated bagels going in for a dip.

The one thing that always ticks me off is that once my bagels are in the boiling water, they go all wrinkly. And they come out wrinkly. I don't know why this is but I have found that some of the wrinkles bake out.

Here is what they look like when they come out of the boiling water: 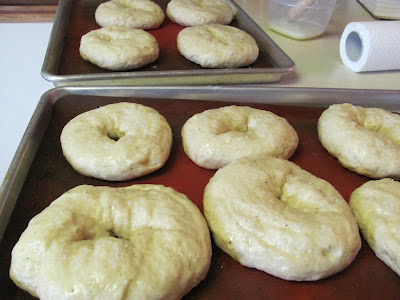 And here is what they look like when they've been baked: 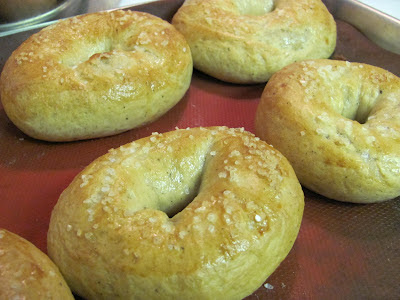 Not bad. The batch I made today tasted the best of any I've made: chewy on the outside, but nice and soft on the inside. I boiled these longer than I normally to, and I think that was important. I also used molasses today instead of barley malt syrup because I haven't been able to find any of that particular ingredient yet. The molasses worked very well, though, and I added about a tablespoon or so to the water for the boil. I put the black pepper in, as it is in the original recipe, and this definitely gave them a kick. 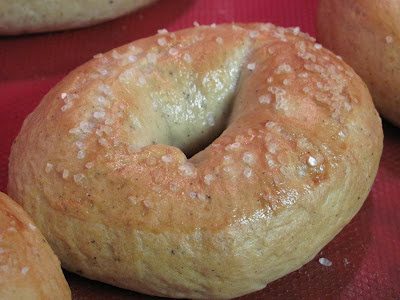 Posted by Wandering Coyote at 6:44 PM