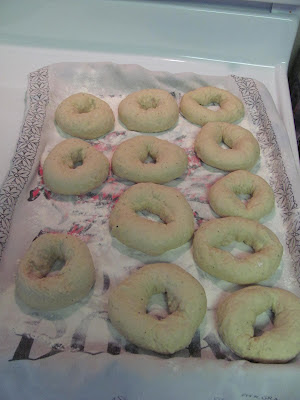 I was nearing the end of my last batch of bagels, so this weekend I decided to make some more. I am determined to become a bagel-making queen! Again I used Rose Levy Beranbaum's recipe from The Bread Bible, but I did a few things differently this time.

I still need a lot of practice portioning and shaping the bagels. One of the reasons I decided to go with 12 bagels over 10 is that it was easier for me to eyeball the portions, but even with this change I had different-sized bagels. What I might do next time is weigh the dough out before portioning and divide the weight by 12 so I'll get the most consistent size. Shaping is still an issue, though it was better this time than it was before. Rolling ropes of dough, or making holes in dough like this, is not one of my fortés. 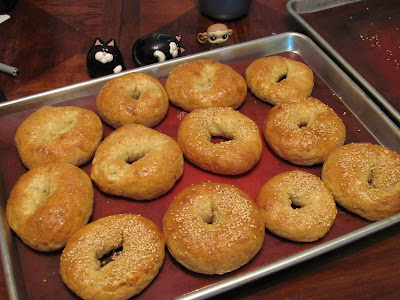 So, things are coming along. These should last me over 2 weeks, so I'll make more then.
Posted by Wandering Coyote at 8:07 PM

Impressed with your bagels. I just read about you on my friend from Life in the slow lane at Squirrel Head Manor. Love your recipes.
Rita

Hi Rita, thanks for stopping by and commenting!

These look so good. I should try making them again as I can't buy them here. Do you store them in the freezer or how do they last 2 weeks?

Shirley: yes, I store them in the freezer in freezer bags. They freeze great. :)

I have never made bagels. But I sure love to eat them. Mmmmmmm