First of all, I have to share this with you. I bought more baby bok choy for super cheap at T&T last week, and as I was cutting it and cleaning it to put in this soup I'm about to tell you about, I came across a nice little surprise: 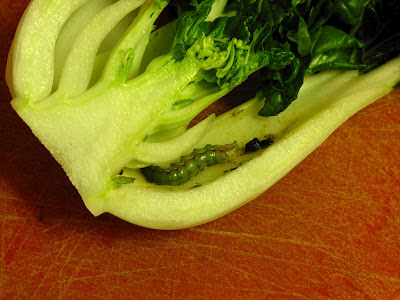 Yes, it's a nice juicy caterpillar! It was dead. But it totally grossed me out to the point where I had to chuck out the rest of the head.

Anyway, on this trip to T&T (I went to the bigger store at Surrey Central), in addition to buying bok choy, I wanted some soup. I love ramen. I know I should not, but there you go. There is a TON of ramen and ramen-like instant noodle packages at T&T it's almost ridiculous. I hardly knew what to choose because I wasn't used to any of the brands other that Sapporo Ichiban, and that was 99¢/package and there was stuff there that was way cheaper. I went for some that was 39¢/package, made by this company from Thailand. The noodles are called Mama something, the something being in the Thai language that I obviously don't read. But this is basically the deal:

Inside the package with the noodles were 3 seasoning packs. One was a powder, one was a paste, and one was marked chili powder. The paste had a shrimpy scent to it, which made sense because it was a package of shrimp-flavoured noodles. I tossed the chili powder.

This is the soup I made, with shrimp and caterpillar-free bok choy: 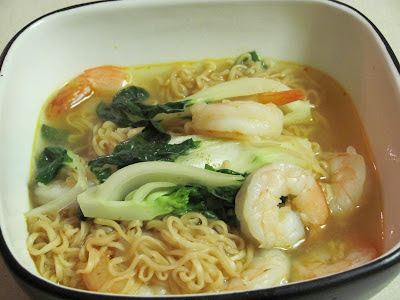 I will never buy Sapporo Ichiban again! This was great. There was a bit of heat in it, and it did not have a salty fake taste to it like other ramen. This tasted like a more "authentic-ish" broth. The noodles were better, too.

And at 39¢ you can't go wrong, really. I have two more packages in the pantry, one is chicken.

And I think I'll be giving bok choy a break for a while...
Posted by Wandering Coyote at 1:05 AM

I saw the pound sign on the price tag and wondered that weren't you in Canada? I had to check your blog to see if you were or not! I think they have Mama noodles here in Finland too. I'll have to remember to look. Have you heard of Ramen coleslaw? http://allrecipes.com/recipe/ramen-coleslaw/detail.aspx
I make it with iceberg lettuce and some other changes but I think it will be nice on a hot day.

I found those pictures of the packages on the internet since I didn't photograph my packages myself. Yes I am in Canada! Sorry for the confusion. :)

I have had a few ramen salads in my time and have enjoyed them. I'll definitely check out the recipe you linked to. Thanks!

Actually, the recipe you linked to looks very much like one my mom used to make!

Looks yummy! I will try some from the T & T here.